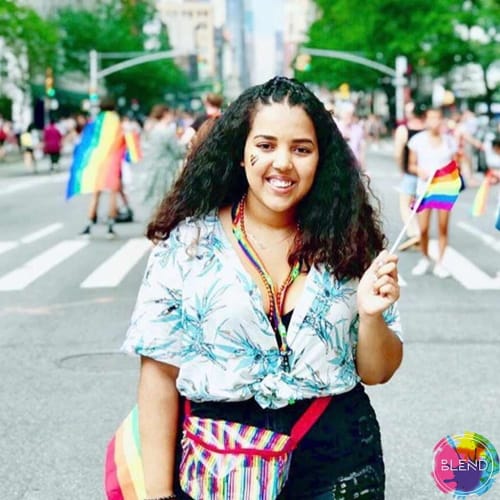 Although I have a pretty big extended family, my immediate family consists of just my mom and me. We are extremely close, and I never wanted anything to get in the way of our relationship. Despite discovering my queer identity in my early teens, I decided to keep it hidden until I was 20-years-old.

I valued our relationship so much and I was trying to come out, but I kept bailing out at the last minute. Finally, I hand wrote a letter to my mom and left it under her pillow before I went back to Syracuse.

After a few more days, I finally received a call from my mom. She had read the letter. We exchanged a range of emotions and heartwarming words.

There was confusion, relief, and fear exuding from both of us. She had so many questions, and I was more than happy to answer every single one of them.

After this, I thought I was done, but I was in for a rude awakening. After, coming out to the important people: parents, family, and friends, I thought there was no one else.

I hadn’t considered all of the future classmates that would assume heterosexuality. This was when I realized coming out is a continuous activity for LGBTQ+ people.

As for how I realized I wasn’t straight, I knew around middle school when I had crushes on girls. However, I pretended to like boys in an attempt to be like my friends until high school.

This is when I met girls who were outwardly queer and proud of it. They allowed me to explore my own feelings despite still being exposed to homophobia in religion, the media, and my household.

For this reason, I hid my sexuality from everyone except my best friend for four years. Luckily, I have been constantly supported and encouraged to be myself by my loved ones once I came out.

There is a lack of media representation for queer women. In most cases, the little representation that exists does not encompass the many different sub-identities within the queer community. Having said that, the progress that has been made in the acceptance by the LGBTQ+ community is immense.

Past activists have fought extremely hard to gain the acceptance that is visible today. Everyday people become more educated on issues that people in the LGBTQ+ community face and grow more empathetic.

How I Deal With Backlash Against My Bisexuality

How I Validated Myself When I Came Out